Hands are vulnerable to a multitude of hazards in the workplace, including a number of mechanical risks. Whether handling small parts, carrying out demolition, working with glass or many other tasks, there are a huge number of workers at risk of sustaining injuries through cuts and lacerations to their hands. This is why it’s important to identify and provide the most appropriate safety gloves for the specific task.

If the wrong selection is made, it could be equally as dangerous as not wearing any hand protection at all. Simply wearing safety gloves of any kind may cause a worker to become complacent and less cautious of the hazards they’re potentially not protected against. In addition, safety gloves that are ill-suited to a task may also inhibit dexterity or get caught in machinery.

EN 388:2016+A1:2018 is the key accreditation to look out for when making this decision. That’s why we have created this guide to help you determine the performance level you can expect from gloves tested to this standard.

EN388 is used in conjunction with the EN420 standard. This covers general requirements and test methods for protective gloves, and the current version is EN 420:2003+A1:2009.

In order to help users and safety managers determine the protection level of a pair of gloves, EN 388:2016 uses index values to rate the performance of a glove when protecting against various mechanical risks. These include abrasion, blade cut, tear, puncture and impact. The 2016 edition of this standard enables you to better match the protection required against the hazards present in your work environment.

Accredited products are marked with the EN 388:2016 pictogram. Below this icon will be 4 numbers and 1 or 2 letters, which indicate the test performance of the gloves against each hazard.

Until 2023, products tested according to EN 388:2003 are still valid, hence many safety gloves available today are still certified to the 2003 version. This doesn’t mean these gloves are inferior, but in time they will be re-tested to EN 388:2016 under the new testing methods.

In the revised edition of EN388, some of the tests from the 2003 version remain unchanged whereas others have been improved. Keep in mind that it isn’t the performance of the glove that has changed, but the way of testing the performance.

In the abrasion test, new abrasive test paper is used, so it may be possible for some abrasion scores to change when a product is recertified under the new test conditions.

The most notable change, however, relates to cut protection as a new category of protection has been introduced. The EN 388:2003 cut test, known as the ‘coupe test’,  is now supplemented with the additional EN ISO 13997:1999 test method. The reasoning for this addition will be explained later in the guide.

EN 388:2003 did not include testing for resistance to impact. When gloves have impact protection under EN 388:2016, this means they have been tested according to the EN 13594:2015 test method. The impact protection test is optional and any gloves that meet these criteria are marked with a P.

Due to the introduction of the new ISO cut method and impact test, the EN388 marking now includes two new elements that you can look out for. This will be explained in more detail below. 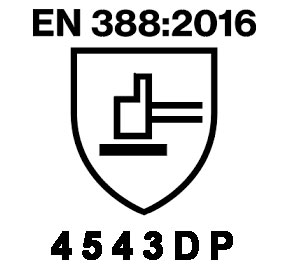 If one of these characters is replaced with an ‘X’ it means that the test has either not been performed or is not applicable.

If one of the first four characters is replaced with a ‘0’ it means level 1 cannot be achieved.

The EN 388:2016 pictogram will not be displayed if the glove doesn’t achieve a minimum of level 1 or A for at least one test.

The impact test (signalled with a P at the end of the code) is optional and normally used for gloves which are specifically designed for work involving higher impact and vibration hazards.

How the safety gloves are tested

The first number in the code under the EN388 pictogram relates to abrasion resistance. The material of the gloves is subjected to abrasion by sandpaper under a determined amount of pressure.

The protection level is indicated on a scale of 1 to 4 depending on the number of turns until a hole appears in the material. The higher the number, the better the resistance to abrasion.

The second number relates to cut resistance according to the coupe test. This involves a rotating circular blade moving horizontally to-and-fro across a fabric sample, with a fixed force of 5 Newtons applied from above. The test is completed when the blade has broken through the sample material and the result is then specified as an index value. This result is determined by the cycle count needed to cut through the sample and additionally by calculating the degree of wear and tear on the blade.

The protection level is indicated by a number between 1 and 5, where 5 indicates the highest level of cut protection.

However, as mentioned previously, if the material blunts the blade during the coupe test then the cut test from EN ISO 13997 (TDM test) shall be performed. This is to ensure the protection performance value of the glove is as accurate as possible. If blunting does occur during the coupe test, the results of the TDM cut test will be the default marking shown on the glove, and the coupe test value will be marked as X.

The third number relates to tear resistance. The test involves finding the force required to tear the glove material apart.

The protection function is indicated by a number between 1 and 4, where 4 indicates the strongest material.

The fourth number relates to the gloves’ puncture resistance. The result is based on the amount of force required to puncture the material with a tip.

The protection level is indicated by a number between 1 and 4, where 4 indicates the strongest material.

The first letter (fifth character) relates to the cut protection according to the EN ISO 13997 TDM test method. The objective of this new test is to determine the resistance of the safety gloves by applying great force to the sample fabric in a single movement, rather than in continuous circular movements like in the coupe test.

A knife cuts with constant speed but increasing force until it breaks through the material. This method allows for an accurate calculation of the minimum force required to cut the sample material at a thickness of 20mm.

Products that performed well under the EN 388:2003 coupe test may not necessarily perform as well under the TDM test. While the coupe test offers an effective representation for cuts caused by sharp, fairly lightweight objects, the TDM test gives a more accurate specification in terms of cut resistance during work which includes different impact-based hazards.

The result is given by a letter from A to F, where F indicates the highest level of protection. If any of these letters are given, this method determines the protection level and the coupe test value will be marked with X.

The test is based on the mean transmitted force of the material and is carried out in accordance with part 6.9 (impact attenuation) of EN 13594:2015 Protective Gloves for Motorcycle Riders.

How to choose the right safety glove for your task

The EN 388:2016 standard helps you to identify which gloves have the appropriate level of protection against the mechanical risks in your work environment. For example, construction workers may encounter abrasion hazards regularly and metal fabrication workers may require protection against cutting tools and sharp edges. From cut resistant gloves to specialist protection gloves, there are a number of products available to suit these different needs.

Workers may need to maintain tactility, dexterity and grip, or perhaps protect against harmful chemicals. For this reason, it is best to look for multi-purpose safety gloves that meet a range of protection requirements.

You should also ensure that gloves offer a high level of comfort and support for all-day wear, as well as breathability and features that reduce hand fatigue and the risk of musculoskeletal disorders.

Identifying the best gloves to use for a particular application can be accomplished through a PPE assessment, where you examine the hazards present in the workplace and establish what protection each worker will need. You can then select appropriate gloves, starting with the greatest hazard a worker will face while performing their job.

Looking for protective gloves for the colder months? Check out our guide to protecting outdoor workers in winter. 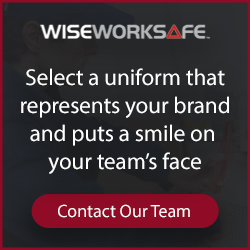